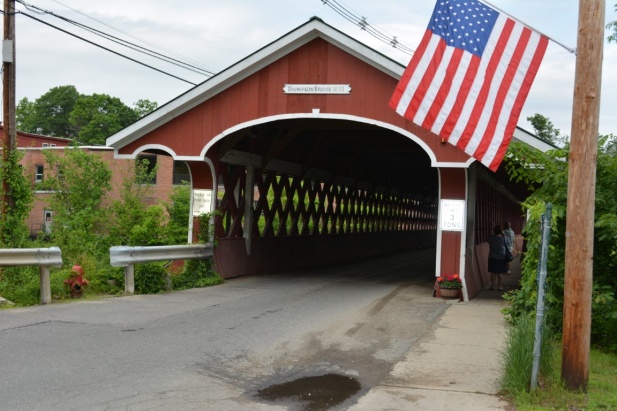 The southwestern corner of New Hampshire has six covered bridges all within a small radius.  Most of the bridges were built to cross the Ashuelot River. Designers and builders covered bridges so that they would be protected from the elements and would not rot as quickly.

The town of Winchester, NH has two covered bridges.  One is the Ashuelot/ Upper Village Covered Bridge.  This is a Town Lattice Truss bridge named after the architect Ithiel Town.  There is some confusion over when the bridge was actually built, the plaque on the bridge indicates 1853-1858 but there are other records that indicate it was built in 1864.  Either way, it is old.  It is unusual because it is painted white with red trim.  It is one of the prettier bridges in New Hampshire and makes a spectacular photo when there is snow on the ground or in fall when the leaves are turning.  It can be reached by following Rt 119 to Gunn Mountain Rd.

Coombs Bridge is also in Winchester.  It was built in the 1830’s (there is some discussion as to the exact year).  Anthony Coombs was the builder of the bridge.  This bridge can be reached by taking Rt10 to Coombs Bridge Rd.

Swanzey, NH boasts four covered bridges.  The Carlton / Whitcomb Bridge is a shorter span bridge than the others and has a truss structure that is similar to those used in barns in the area.  Historical records indicate that it was built by local barn builders.  Take 101 to Keene to Rt 12 South.  From Rt 12 follow Rt 32 to Carlton Rd.  About a quarter mile on Carlton Rd you will cross the Carlton/Whitcomb Bridge.  The first covered bridge was built in this spot in 1869.  It was completely rehabbed and restored in 1996.

Swanzey is also home to Cresson/Sawyer’s Crossing Bridge.  This is located on Sawyers Crossing Rd in Swanzey.  The first covered bridge in this location was built in 1859.  It is also a Town truss bridge.

Swanzey’s third covered bridge, the Slate Bridge (on google it may be labeled State Bridge).  Built in 1862, it is located on Westport Village Rd. This bridge is about 143 feet long and is a lattice truss structure.

The Thompson / West Swansey Bridge is the fourth covered bridge.  This bridge is located on Main St / California Street.  This bridge was originally constructed in 1832 by Zadoc Taft.  In 1973, the bridge was deemed unsafe.  The school busses were allowed to cross but all the students had to unload on one side walk across the bridge and then reload on the other.  A modern steel bridge was constructed in 1976 specifically for the heavier vehicles.  Since that time the original covered bridge has been rebuilt.  This bridge and Slate Bridge have a fire alarms and sprinkler systems.

©2021 MLS Property Information Network, Inc; The information in this listing was gathered from third party resources including the seller and public records. MLS Property Information Network, Inc. and its subscribers disclaim any and all representations or warranties as to the accuracy of this information.
Copyright 2021 New England Real Estate Network, Inc. All rights reserved. This information is deemed reliable, but not guaranteed. The data relating to real estate displayed on this Site comes in part from the IDX Program of NEREN. The information being provided is for consumers’ personal, non-commercial use and may not be used for any purpose other than to identify prospective properties consumers may be interested in purchasing. Data last updated January 27, 2021.

Listing data is derived in whole or in part from the Maine IDX and is for consumers' personal, noncommercial use only. Dimensions are approximate and not guaranteed. All data should be independently verified. © 2021 Maine Real Estate Information System, Inc. All Rights Reserved